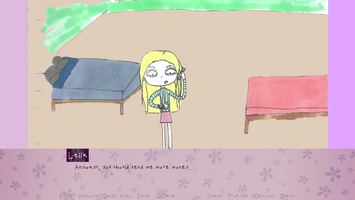 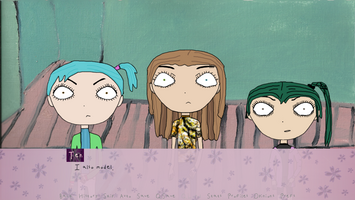 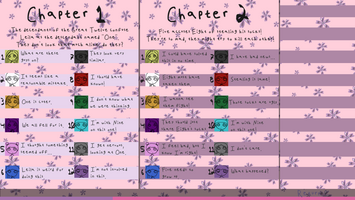 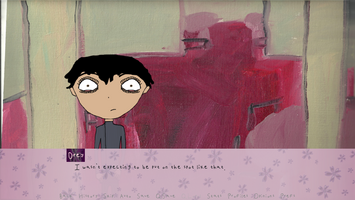 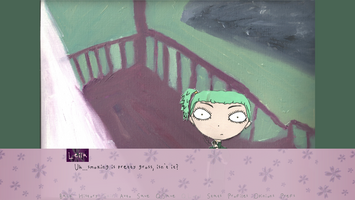 schlo pink and purple was released a couple of days ago! It's a cute dating sim focusing on the descendants of the Great Twelve, a group alluded to in previous schlo projects.

This project is the most complex game I've made yet, in terms of programming and gaming experience. It is technically the third dating sim I've made, though it's the first more traditional dating sim I've made, the ones prior being more story-based. I wanted to combine a more standard version of a dating sim with ideas of what would make one more tolerable/taking out what I think is bad about them. My biggest inspirations for dating sims coming from old ones hosted on Newgrounds, like the galaxy angel dating sim. I'm not very familiar with newer dating sims, so I'm not sure if the standard has changed over the years.

Dating sims are sort of meant to be really mundane...but worrying about stats a lot is not very fun. I would have done totally without stats, but that seemed like it would be too lackluster. I wanted to make the dialogue a little more varied than older dating sims by providing a big amount of conversational topics. The other specific aspects of this game being trivia, fighting and complimenting. I spent so much time writing the normal conversational pieces, I was rather burnt out on writing the dialogue when it came to the other aspects of the game.

At times, I was frustrated with how long this project took, which was about 8 months. I was simultaneously writing another project while also working on this one in the beginning, which could have skewed how long it would take. I suppose I'll get more into my production ideas regarding this sort of project at a later time. I will say now though that I wasn't initially intending on creating a game that is only about the Great Twelve descendants. I have not had the best of luck in the past whenever I have tried to write about the group in the past, so it is a personal accomplishment that I was able to stick with this one.

The game features music made by strawberry peeler, which is quite exciting. It is the first time I have collaborated with anyone! The music is much better than I could make on my own. I bet having music I made adds a certain element to the overall product, but it seems to be a great addition to this sort of game!

I still have several schlo projects planned for the future. If I were to be working on another dating sim next, I wonder what sort of elements from this game I should use again? I have a few ideas on how to alter game features, but I often times wondered if what I planned for schlo pink and purple would seem satisfactory to other people.

I hope it's an interesting play! I'm proud of the story and the art and everything. It might be my second or third best work so far (after Schlo: Final Stand (which I am still the most proud of!) and clerence, maybe...?), so it's definitely worth checking out!

Get schlo pink and purple